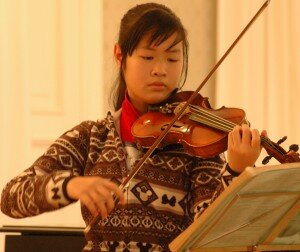 We had our roads past Fagerborg church up an icy Schumsgate and into Lyder Sagens when Minh, low-key and one whose devotion in his voice says “it’s good to be back”

The long flight from Vietnam and the tram ride in rush hour traffic where Norwegians are not known to show magnanimity was soon forgotten when it rained hugs and declarations of how good it was to see the two visitors again and the interaction was able to continue.

It was a presentation of gifts from Minh and Nhi and the whole was characterized by the fact that these people do not just have a musical relationship.

“This is so great fun” exclaimed Sigyn Fossnes after Nhi had played a bit and you could clearly see the joy of working together. A partnership that was characterized by the fact that there are a half years since they last saw each other. You have you developed since the summer was the conclusion when Nhi had finished his first Master Class at the Barrat Due and she will probably develop further during her stay here in Oslo.

“Do you like to attend this course” I asked Minh before his Master Class started. “Yes!” Minh replied, equally obvious that my question was stupid. Of course he does. Sigyn Fossnes could again see a development from the last time they worked and asked what it was he would be willing to work with during his stay and it voted one of the answer to that Sigyn envisioned that they had to work with. Music to their ears, I would imagine.