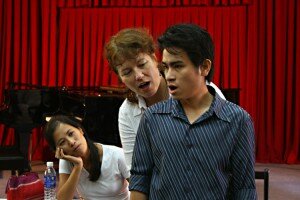 Transposition was initiated and developed in 2006 by Geir Johnson, then director of the Ultima Oslo Contemporary Music Festival. The project came about when Vietnamese music institutions expressed a wish to collaborate with the professional music scene in Norway. Preparing for a research tour in Vietnam in 2005, conversations were carried out with managers for the most important music institutions in Vietnam. These conversations formed a situational report presented for the Ministry of Foreign Affairs later this year.

In spring 2006, initial discussions with Norwegian music institutions were held. The goal was to establish what relevant partnerships could be formed between music institutions in Norway and Vietnam. The first project was a concert to mark the diplomatic relations between the two countries in December 2006. On this occasion, it was decided that Transposition would come into operation from 2007.

The initial phase of Transposition, from 2007 to 2009, was concerned with establishing a mutual understanding between the partners. Building trust and opening channels both on an administrative and a personal level among the Norwegian and Vietnamese partners were the main goals for this period. Originally, two major projects were planned, one in Hanoi and one in Ho Chi Minh City (HCMC). I Hanoi , the aim was to contribute professionally in the development of the Vietnam National Symphony Orchestra. The other project was concerned with strengthening the Conservatory of music in HCMC by establishing an education programme.

Read more about the partners in Norway, in Vietnam and artists involved in Transposition.