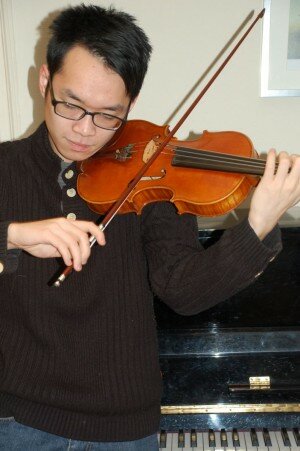 Nguyen Thien Minh practicing his violin at the Barratt Due Institute of Music.

INTERVIEW: From paintbrush to violin bow

At the Friendship Concert for Norway and Vietnam 19 March 2014, a true product of the Transposition program is part of the ensemble from the Barratt Due Institute of Music.

21-year old Minh Thien Nguyen finishes his bachelor degree at the Barratt Due Institute of Music in Oslo this summer. Right before leaving Oslo for his home town Hanoi, he was accepted into the master’s program. Two more years in Oslo lie ahead for this playful violinist who is a natural part of  the Barratt Due ensemble.

Unlike many young instrumental talents, Minh was not born into a music family – but certainly a creative one. His mother is a translator, and his father is a painter and director of cartoons:

– My nickname at home means ”paintbrush” in Vietnamese. They wanted me to study drawing and maybe become a painter as well. It’s funny, because the nickname of my younger brother was ”Mi”, as the musikal note E. He’s actually studying multimedia and graphic design, and I, the ”paintbrush”, am studying music. It should really be the other way around, he laughs.

The family even has made art together by all taking part in one of his fathers’ cartoons:

– My mom wrote the storyline, and my father drew the script and had his crew make the movie. I read the script, we decided how the music should be and I created it on my computer. My brother watched everything at the end, pointing out graphic mistakes and scenes with errors. It was so much fun making a cartoon together.

His parents did give some musical encouragement by buying Minh a toy organ when he was six.  He proceed to play the piano in a music school for children. However some of Minh’s professors saw the potential in him as a violinist. He switched instruments and started winning prizes in competitions all around Asia.

When asked about preferred composers, Minh states that he doesn’t, ”simply because I love them all”:

– Mozart’s music is very happy, elegant, sometime funny in a crazy way. Beethoven however, his character changed from time to time, from very classical, close to Mozart to depressed when he became deaf. But if I can choose what to play, I’d like to play something fun, like Bartok, or Grieg. If you ever see my performance you’ll see that I’m on the energetic side of playing, Minh says.

The audience at the concert will be fortunate enough to hear him play both Mozart and Grieg.

– How did you first get in contact with the Transposition programme?

– Transposition used to have musicians from my Music academy in Vietnam to come to Norway, have masterclasses, and later join Valdres summer festival. 5 years ago I had a chance to come, and later I was invited to come back a few more times.

As soon as he finished high school, he passed the audition to get in at the Barratt Due Institute of Music, which he describes as “the best thing that ever happened to me”.

– Norway is a perfect country for studying simply because you don’t have much to do exept for studying, Minh jokingly states.

– Being from Asia, this is like a whole new life for me. Everything is the opposite: Less activities, less noise, easy to focus. Norwegians are very friendly. I have many friends at school, some very close.