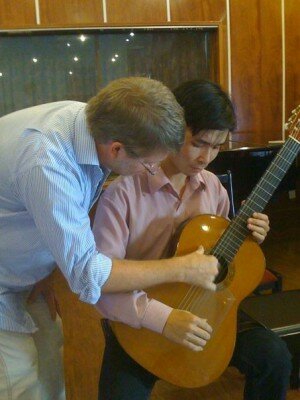 Huy Nguyen Thanh from Guitar department of HCMC Conservatory just posted these photos on Facebook from the first days of work shop/masreclass. Everyone works hard towards the recital on Friday.

Take a look at our facebook pages and visit Huy’s pages: www.facebook.com/guitarsaigon

Violin teacher Son introduces Rector in VNAM for some ideas

Grete H. Rasmussen (Barratt Due Institute of Music) and web designer Leif Haglund are developing a webpage on instrumental teaching together with six instrumental teachers in Vietnam National Academy of Music. Grete and Leif will hold a workshop with the teachers at the Academy in Hanoi in November.

Transposition’s annual partner meeting will take place in Hanoi on October 24. Representatives from the Norwegian and Vietnamese partner institutions are invited to the meeting where next year’s activities will be discussed.

Paul and one of his students at HCMC Conservatory

Paul Arlidge has developed an english language course for instrumental teachers and musicians in Vietnam. This is the fourth time he runs the course at the Conservatory in HCMC. 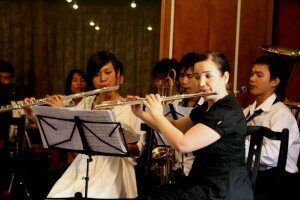 From a workshop at HCMC Conservatory, March 2010

Musicians from The Norwegian Military Bands hold workshops with percussionists, brass and wind players at HCMC Conservatory. The workshops will lead to a house concert at the conservatory. 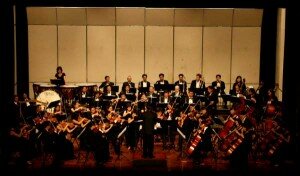 HBSO will perform Carl Orff’s cantata Carmina Burana in Saigon Opera House the 19th of September. Three musicians from The Norwegian Military Bands will hold master classes and participate in the concert. Transposition has also invited Daniel Sæther (tenor) and Thorbjørn Guldbrandsøy (baritone) to sing two of the solo parts in Orff’s scenic cantata for choir, soloists and orchestra. 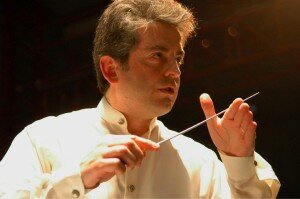 The renowned Norwegian ensemble Bodø Sinfonietta is part of NAPO, one of the partners in Transposition. The ensemble will visit HCMC together with French conductor Pierre-André Valade to hold workshops and concerts at the Conservatory.

Photos from the Beethoven Symphony project

The project was sponsored by Transposition as a part of the Conductor Scholarship Program.

While one half of the Norwegian Transposition administration takes summer holiday, the other half travels to Vietnam.

The three violin students Minh, Nhi and Viet Ha have been in Oslo this week to attend Master Classes with Stephan Barratt Due and Sigyn Fossnes.